The Birdman of Winchmore Hill 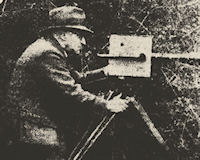 This is where pioneering nature photographer lived.

Description: This is the house where pioneer wildlife photographer Oliver Pike (1877-1963) lived with his family from 1882 to 1914and worked on his pioneering early natural history photographs and books.

Oliver Pike was probably the first professional wildlife photographer. He pioneered the development of equipment and techniques in still images and cine-film; many of his films are held in the British Film Institute National Archive.

Pike's first film, In Birdland, premiered at the Palace Theatre, London in August 1907, was the first British wildlife film to be screened to a fee paying audience.

Oliver campaigned for the welfare and care of wild creatures and his continuing influence is still felt today in the fields of conservation and protection, Sir David Attenborough regarding him as a 'pioneering figure'.