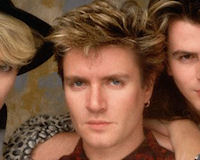 Description: This is the childhood home of Duran Duran's lead singer Simon Le Bon, the eldest of three sons of John and Ann-Marie Le Bon. He was encouraged to develop his artistic talent and was a member of the local church choir and trained in drama.

He was born in Bushey Maternity Hospital and went to Pinner County Grammar School, the same school that Elton John attended. He appeared in television commercials and also in several theatre productions including Tom Brown's Schooldays in London before going to work on a Kibbutz in Israel.

When he returned to England he went to study drama at the University of Birmingham where he met the other members of fledgling new wave and synth-pop band Duran Duran in 1980.

Duran Duran had 14 singles in the top 10 of the UK Singles Chart and 21 in the Billboard Hot 100. They have sold over 100 million records worldwide.