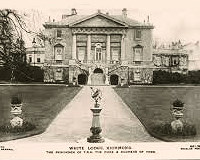 Where Nelson laid out his battle plans for Trafalgar.

Description: White Lodge is a Grade I listed Georgian house situated in Richmond Park, housing the Royal Ballet Lower School. It was however formerly a royal residence and the birthplace of Edwards VIII.

It was built as a hunting lodge for George II, by the architect Roger Morris, and construction began shortly after his accession to the throne in 1727, and completed in 1730.

On the 10th September 1805, six weeks prior to the Battle of Trafalgar, Horatio Nelson visited Lord Sidmouth here and laid out his battle plan to him.

The White Lodge then returned to royal use in 1923, during the honeymoon of Prince Albert, Duke of York and the Duchess of York.