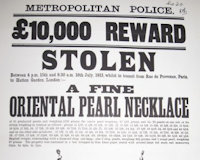 The scene in 1913 of the Great Pearl Robbery.

Description: This eminent jewellers was the focus for one of the great crime robberies in the 20th century. Since 1955 it has been E. Katz & Co., founded by the remarkable Czech family of Emil Katz, but in 1913 it was on the front page of nearly every newspaper in the world.

The shop was owned by Max Mayer back in 1913 and when he bought the finest pearl necklace, the Mona Lisa of Pearls, in existence at a Paris auction. It was a stunning necklace of 61 flawless, blush-pink pearls of varying sizes with one huge one at it's centre.

Mayer had offered it to a Paris dealer Salomans to view, but the sale fell through, and the dealer returned the necklace by registered post. When Mayer broke open the three intact, monogrammed seals, here in his office, he saw not the necklace, but 11 lumps of sugar. New copy seals had been added.

A massive police operation followed with no luck until someone was offered some of them for sale months afterwards. Eventually after a series of prolonged stings the mastermind Joseph Grizzard and the thieves were caught meeting at Chancery Lane tube station, where Grizzard was arrested but still no necklace.

Two weeks later, piano-maker Augustus Horne was walking to work in Highbury when he saw a man drop a box in the gutter and dash away to catch a bus. He opened the matchbox and saw a broken string of pearls, assuming them to be imitation, he gave one to a street urchin to use as a marble, and handed the rest to the police whereupon Mayer's confirmed it was his necklace.