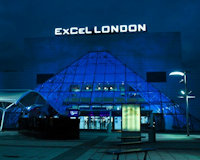 The East London Exhibition Centre repurposed as the Nightingale.

Description: Exhibition Centre London (ExCeL) is an exhibition and international convention centre in the Custom House area of Newham, East London, since 2000.

For the 2012 Summer Olympics, it was divided into five sports halls used for boxing, fencing, judo, taekwondo, table tennis, weightlifting, and wrestling.

In Spring 2020 it was repurposed at record-speed as the NHS Nightingale Hospital - a 4000 bed emergency hospital to support London during the Coronovirus outbreak.

The Year Round Christmas Shop», 4.8km