How to Arrest a Whole Pub 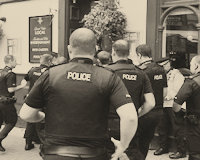 The long gone pub for a den of thieves.

Description: This is where an old pub used to be - it was called the Queen's Head and was a notorious den just off the City Road in the poor East End slums of Victorian London.

In 1891 Henry (Harry) Clarke became landlord and the place took a turn for the worse.

Following a series of high profiles burglaries in London that Autumn, police got wind that the perpetrators lived in this area and Sergeant Alfred Leach heard that they would leave their loot in the backroom at this pub and return on bikes or pony carts.

The following Sunday he watched the carts and bicycles disappear and he went in with three of his men, causing a near riot. Landlord Harry Clarke jumped from the roof and swam across the canal! Meanwhile Leach was behind the bar placating the mob by buying a round of free drinks and saying he had come for Clarke.

Everyone relaxed, but Leach somehow got a message to the local Old Street police station and they sent a regiment of police to seal the exist and one by one they arrested eight burglars and the entire staff of the Queen's Head!

They found two van loads of stolen property from 96 cases of burglary.