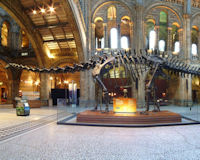 Londons most famous museum and free for all!

Description: The Natural History Museum is a museum that exhibits a vast range of natural history specimens and one of three major museums on Exhibition Road in South Kensington, along with the Science Museum and the Victoria and Albert Museum. It houses more than 80 million life and earth science specimens between it's five main collections of botany, entomology, mineralogy, paleontology and zoology.

The museum is particularly famous for the large Diplodocus cast that dominated the vaulted central hall before it was replaced in 2017 with the skeleton of a blue whale hanging from the ceiling. The dinosaur played the central role in Disneys 1975 live-action film One of Our Dinosaurs Is Missing; where the diplodocus skeleton is stolen from the museum, and a group of intrepid nannies hide inside the mouth of the museum's blue whale!

The buildings ornate architecture - sometimes dubbed a cathedral of nature, with The tiles and bricks featuring many relief sculptures of flora and fauna, with living and extinct species featured within the west and east wings respectively. Just look up!