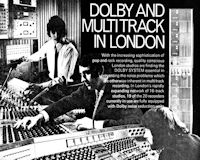 This is where audio quality pioneer Dolby started.

Description: In May 1965 Dolby Labs were founded in the top floor of a building that stood here by American physicist Ray Dolby and his 4 members of staff. They focused on developing noise reduction systems and demonstrated their first prototype to Decca Records in November 1965, who order 9 the following January.

In 1968 they move down the road to 346 Clapham Road, where they stayed until 1992 and Soho Square seemed more beneficial!