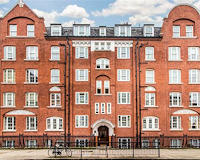 The history of the Eisenhower Tower Block.

Description: It's going to be a brand-spanking new office block but this grand facade on St James Square has a colourful history in it's three previous buildings.

First was St Albans House - the first house built on the square in 1665 by the Earl of St. Albans. The ninth Duke of Norfolk offered it to Frederick, Prince of Wales, following his marriage in 1736 to Princess Augusta of Saxe-Gotha. The couple lived there from 1737 to 1741, and their son (the future) King George III was born here. The Music Room, designed by Giovanni Battista Borra for the ninth Duke's wife Mary Blount, was saved and is now displayed in the Victoria and Albert Museum.

Norfolk House then remained in the ownership of the Dukes of Norfolk until 1938 when it was pulled down and replaced by an office building. During the Second World War this newly prepared by vacant building served as offices for senior officers from a variety of Allied armed forces. This included the Canadian 1st Army and the Supreme Headquarters Allied Expeditionary Force under General Dwight D. Eisenhower.

The building was turned back into offices after the end of the conflict and was extended in the 1970's under a design by TP Bennett.