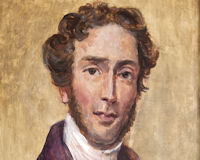 Description: Gideon Algernon Mantell (17901852) was a renowned obstetrician, geologist and palaeontologist, made famous by his work to understand the life of (then unknown) Iguanodons.

His work prior to the Great Exhibition kickstarted the study of dinosaurs. He was responsible for the 1822 discovery and identification of the first fossil teeth, and later much of the skeleton, of Iguanodon.

In 1833, Mantell relocated to Brighton but his medical practice was a financial disaster. He gave a series of lectures from 1838 on The wonders of geology. The council took pity on hiom, bought his house and turned it into a museum, but Mantell even mis-managed this as well - often giving free entry to friends and associates.

After selling his entire research and exhibits to the British Museum, he moved to Clapham Common buying this house in 1838 and turning it into his medical practice.

In 1841 Mantell was the victim of a terrible carriage accident on Clapham Common, somehow becoming entangled in the reins and dragged violently across the ground suffering a debilitating spinal injury.

Despite being bent, crippled and in constant pain, he continued to work with fossilised reptiles and published a number of scientific books and papers until his death. He moved to Pimlico in 1844 and began to take opium, as a painkiller, in 1845. On the 10th November 1852, Mantell took an overdose of opium and later lapsed into a coma.