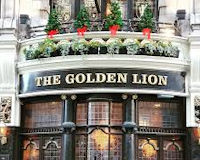 The theatre pub that has lost its theatre!

Description: This beautiful little pub was connected to the (now long gone) theatre next door from it's upstairs bar. It's a theatre pub that's lost its theatre!

The pub dates back to the 18th century, but the theatre next door opened in 1835 and staged works by Shakespeare, Ben Jonson and Oscar Wilde plus a Charles Dickens farce.

On Valentine's Day 1895, St. James's Theatre saw the first night of The Importance of Being Earnest, a production starring the St. James's charismatic manager George Alexander (from 1890-1918), a regular collaborator of Oscar Wilde's. The night was a triumph for Wilde apart from one small detail - the snubbing of his lover's father. John Sholto Douglas (9th Marquess of Queensberry), was the father of Wilde's friend Lord Alfred Douglas and had got wind of their relationship. His ticket for the opening night was cancelled by Wilde and he was refused entry, which didnt stop him causing a fuss outside. Four days later he outed their relationship and Wilde launched a furious and ill-fated libel action that ended in his arrest and conviction.

Hollywood legends Sir Lawrence Olivier and Vivien Leigh also took over the management of St James' Theatre, in 1950. They couldn't make it work any better than the previous post-war owners and in 1954 a property developer acquired the freehold and decided to knock it down. After several years of intense lobbying and protests by Olivier and Leigh, the theatre closed its doors in July 1957 and was demolished later that year.

The pub however has survived! Huzzar!

It is recorded that in 1823 the landlady was kicked to death by a woman customer. Nice.

Check out the commemorative wall reliefs or friezes by E. Bainbridge Copnall depicting the theatres lost history including Wilde, Olivier and Leigh in their legendary production of Antony and Cleopatra, George Alexander, Broadway impressario and final owner Gilbert Miller.

Rule Brittania in The Dove», 4.3km