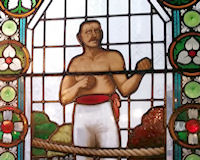 Description: This wooden-panelled boozer looks dated from the outside but enter and it's a shrine to sporting champions basking in super stained-glass light.

The whole gaff is a tribute to England's first bare-knuckle boxing champion James Figg. Close to this spot he ran a training amphitheatre and wooden booth here to train pupils (mostly nobility) in the arts of self defence.

Following a refit in 1954 the brewers began to paint the current racing champion into the external sign every year, a marvellous gimmick starting with the first jockey to be knighted - Sir Gordon Richards in 1954. The trend lasted into the 1970's.

A sympathetic Samuel Smith restoration in 1989 has included non-sporting icons into it's first floor lounge.

The House they left behind», 4.4km