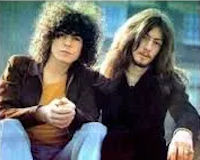 Description: Steve Peregrin Took (born Stephen Ross Porter; 19491980) was an English musician and songwriter, best known for his membership of the duo Tyrannosaurus Rex with Marc Bolan, before working on several solo projects including supporting Hawkwind.

He died here aged just 31 at his home after choking on a cocktail cherry on Monday 27th October 1980 although morphine may have had something to do with it.