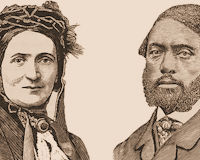 Description: This house was the home of a remarkable couple - Ellen and William Craft from 1857 to 1868. They were both born into slavery in Georgia, USA, meeting when Williams original owner sold him to settle gambling debts.

They married in 1846 despite being forbidden from having a legal ceremony and didnt want to raise their children as slaves, they planned a daring escape - Ellen disguised herself as a man (her right arm in a sling concealing that she couldnt write). William pretended to be her personal servant.

Fleeing to the relative freedom of Boston, they became local celebrities, recounting their adventures at abolitionist meetings. But as fugitive slaves, they were pursued by bounty hunters and fled to England in December 1850.

In this house they campaigned to end slavery and published a bestseller about their daring escape to London. It was not until we stepped ashore at Liverpool that we were free from every slavish fear wrote William.

They eventually returned to the United States after the American Civil War and opened a school for the children of freed slaves.

A blue plaque was unveiled here in October 2021.

The shop of Ignatius Sancho», 3.6km