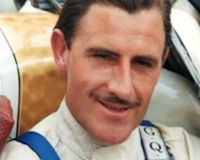 The home of racing champions Graham and Damon Hill.

Description: This house was the home of two-time Formula One World Champion Graham Hill from 1960 to 1972. He lived here with his wife, Bette, and their children from Belsize Park in November 1960 and many of his triumphs date from his time here.

Hill is the only driver in history to have achieved the motor racing triple crown: winning the 24 Hours of Le Mans, the Indianapolis 500 and the Formula One drivers' world championship.

His son, Damon, who grew up here, followed in his footsteps, winning the 1996 world championship, making them the only father and son to win the title in the history of motor racing.

They moved out to Hertfordshire in 1972 but just three years later his life (and 4 members of team) was tragically cut short in a light aeroplane crash at only 46 years old.

An English Heritage blue plaque was unveiled here by his racing champion son Damon Hill in 2003.