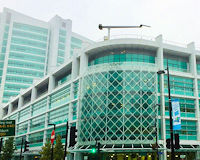 The hospital where George Orwell married.

The hospital was founded (as North London Hospital) in 1834 to provide clinical training for the medical classes of the university.

In 1835, Robert Liston became the first professor of clinical surgery here, and the first major operation under ether in Europe was conducted here by Liston on the 21st December 1846.

Crime author Agatha Christie worked here during the Second World War, learning a lot about poisons that she included in her novels such as 1961s The Pale Horse. The theme of thallium poisoning, was apparently suggested by UCH Chief Pharmacist Harold Davis.

Many famous Londoners were born here including comedian Dick Emery.