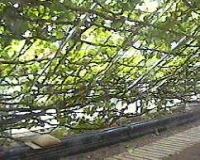 The GReat Vine, reputedly the oldest vine in the world.

Description: The Great Vine in the Hampton Court Palace Gardens is the oldest and largest known vine in the world.

It is reputed to be over 230 years old and 36.5 meters (120 feet) long, and believed to have been planted by Lancelot Capability Brown around 1768, during his time as Surveyor to George III's Gardens and Waters. The vine is also the oldest plant in the palace gardens, having come from a small cutting at Valentine's Park in Essex (which no longer survives).

The current aluminum Vine House was built in 1969. It incorporates wrought-iron Victorian supports. The rebuilding was unique as it was the first time a glasshouse was built around a plant. Both the frame that supports the Vine and the viewing gallery (still used by the general public) come from a 19th Century wooden vine house.

The grapes, which are black and sweet, have always been used by the Royal household as dessert grapes. In 1930, however, George V started sending the grapes to hospitals, and within five years they were being sold to palace visitors. Today, the full crop of black eating grapes is sold to visitors in the palace shops in late summer or early autumn.

In 1933, the grapes were 6 shillings per pound. A shilling of this went towards the baskets in which they were sold. These baskets were specially made by soldiers blinded in the First World War.