Downstairs at the King's Head 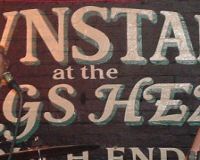 One of the oldest and most reverred comedy clubs in Britain.

Description: This comedy club is one of the oldest in Britain founded in 1981 by Huw Thomas (a lecturer in Drama at Middlesex University) and Peter Grahame (a musician/composer) both living in Crouch End.