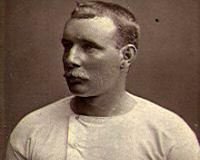 The first man to swim the channel lived here.

Description: Captain Matthew Webb lived here, he was the first man to swim the English Channel (on 25th August 1875). He swam from Dover to Calais in less than 22 hours.

Whilst serving as second mate on the Cunard ship 'Russia', travelling from New York to Liverpool, he attempted to rescue a man overboard by diving into the sea in mid-Atlantic. The man was never found, but Webb's daring won him an award of Â£100 and the Stanhope Gold Medal, and made him a hero of the British press.

In 1873 Webb was serving as captain of the steamship 'Emerald' when he read an account of the failed attempt by J. B. Johnson to swim the English Channel. He became inspired to try himself, and left his job to begin training, first at Lambeth Baths, then in the cold waters of the Thames and the English Channel.

His final stunt was to be a dangerous swim across the Niagara River in the rapids below Niagara Falls for a prize of Â£12,000 â a feat many observers considered suicidal. At 4.25pm on 24 July 1883 he jumped into the river from a small boat and began his swim. Within 10 minutes he had become caught in the current and was dragged under by a whirlpool. His body was found four days later and buried at Oakwood Cemetery, Niagara Falls.