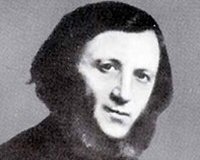 In 1868, it was here that Browning finally completed and published the long blank-verse poem The Ring and the Book, which would finally make him rich, famous and successful, and which ensured his critical reputation among the first rank of English poets.

Based on a convoluted murder case from 1690s Rome, the poem is composed of twelve volumes.

In 1878 he left to spend his final years in Italy.