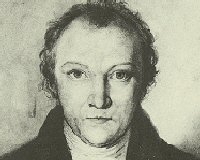 The poet William Blake was born in this house here

Description: William Blake (1757-1827) was born here on November 28, 1757. The house was built on the corner of Broad Street and Marshal Street in Soho. The original house contained four floors and a basement with a narrow stairwell leading to the cramped but not uncomfortable sleeping quarters above. The first floor consisted of a low-ceilinged room of twenty square feet with two fireplaces and a window. Three windows faced into Broad Street, and on the other side a window on each floor had been covered with bricks.

Soho then lay on the extreme northern edge of London with nothing but fields and market gardens beyond, so the young Blake was able to roam freely in the countryside.

Blake remained at 28 Broad Street until 1782, when he moved out to Green Street to set up house with his new wife. Gilchrist, Blake's first biographer, claims that his father, enraged at his marrying an uneducated woman, actually drove him out of the house.

On Blake senior's death in 1784, the eldest son, James, took over the hosiery business at No.28, and the first floor of his hosiery shop was the incongruous site of Blake's May 1809 exhibition of sixteen works, including the Canterbury Pilgrims. The exhibition was not a success.

28 Broad Street no longer survives. The street has been renamed Broadwick Street, and on the site there now rises a block of high rise apartments, William Blake House. Old houses that survive on Broadwick Street, however, give a good idea of what Blake's house looked like.

Chaucer Lived Over the Aldgate», 2.5km