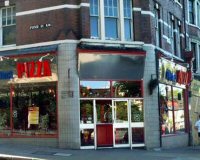 This is where George Orwell lived and worked.

Description: This hideous pizza joint is where a bookshop called Booklover's Corner used to be, where George Orwell used to work and live above in 1934-35. There's an unusual plaque above the door.

While here he was writing Keep the Aspidistra Flying. Booklover's Corner was the inspiration for the book-selling passages in Aspidistra and also the source for his essay Bookshop Memories. In February 1935 he was forced to seek other lodging and moved to 77 Parliament Hill.

The bookshop, was described by one customer as 'a gloomy cave of a place', and was until 1984 called the Prompt Corner, a chess-players' cafe. Now it is a pizza house.