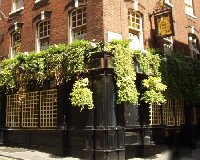 The pub where Samuel Johnson formed his supper club with Boswell

Description: This pub was inexplicably renamed the Edgar Wallace in 1975 in honour of the ships cook turned infamous screenplay writer in Hollywood.

It used to be called the Essex Head where Samuel Johnson founded a club in 1783 that met 3 times a week. James Boswell was a member, and here's a letter he wrote to Reynolds:

'It is inconvenient to me to come out, I should else have waited on you with an account of a little evening Club which we are establishing in Essex-street, in the Strand, and of which you are desired to be one. It will be held at the Essex Head, now kept by an old servant of Thrale's. The company is numerous, and, as you will see by the list, miscellaneous. The terms are lax, and the expences light. Mr. Barry was adopted by Dr. Brocklesby, who joined with me in forming the plan. We meet thrice a week, and he who misses forfeits two-pence[792].

'If you are willing to become a member, draw a line under your name. Return the list. We meet for the first time on Monday at eight.'

Essex House used to be nearby, giving it's name to the old name for this pub.