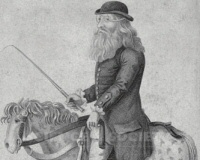 This is where a quack dentist put his late wife on display.

Description: This is where Martin van Butchell (1735-1814), an eccentric dentist, practiced and put his dead wife on display.

Butchell became a dentist in 1760's London. He advertised in St. James's Chronicle with a text: Real or Artificial Teeth from one to an entire set, with superlative gold pivots or springs, also gums, sockets and palate formed, fitted, finished and fixed without drawing stumps, or causing pain.

When his wife Mary died on January 14 1775, he decided to have her embalmed and turn her into an attraction to draw more customers. His teacher of surgery and anatomy Dr. William Hunter and Dr. William Cruikshank agreed to do the job and injected the body with preservatives and color additives that gave a glow to the corpse's cheeks, replaced her eyes with glass eyes and dressed her in a fine lace gown. The body was then embedded in a layer of plaster of Paris in a glass-topped coffin.

When he remarried, his new wife wasnt fond of it, and it went to a museum where it was destroyed in a bombing raid in WW2.

Butchell was trained in anatomy and physiology by William and John Hunter. Possibly on the latter's advice he took up dentistry, but he also had considerable success in the surgical treatment of fistulae, haemorrhoids, etc.

He rode a white pony painted with coloured spots (pictured), and summoned members of his family to his presence by individually modulated whistles.

1» Have just finished doing a family history for a dear friend of mine and Martin van Butchell is her 3 x Great Grandad! How exciting? Would love to know if we could go there. (Mrs Maxine Payne)
Posted by Mrs Maxine Payne on 2007-11-15

The Field of Forty Footsteps», 1.2km