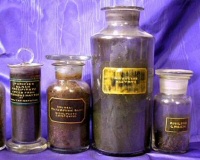 The inventor of key Mauve dye worked on the top floor here.

Description: Here on the wall of Gosling House at the junction of Cable Street and King David Lane is a plaque celebrating the man who invented the colour Mauve. ish.

William (Henry) Perkin (1838-1907) lived here and a young student of chemistry. At the age of 17, he was trying to make quinine synthetically to be used as a cure for malaria in the laboratory on the top floor of his home here. One of his unsuccessful attempts produced a brilliant mauve liquid dye.

Spotting this potential, he discovered other colours and went on to manufacture them on a large scale. He therefore started the modern chemical industry of producing synthetic dyes.

It is thought that his mauveine was used in the printing of the penny lilac stamp of Queen Victoria.

The plaque is blue not mauve sadly.