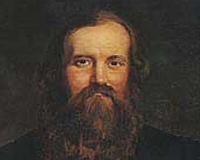 Description: The Scot, John McDouall Stuart (1815-1866) lived and died here. He was the most accomplished and most famous of all Australia's inland explorers and led the first expedition to traverse the continent from south to north successfully. (Burke and Wills were first to cross the continent but both perished on the return journey.)

He died of ramolissement and cerebral effusion on 5 June 1866 in London and was buried in the Kensal Green cemetery. He has remained a controversial figure, lonely and independent, with a fierce pride. His reputation as a heavy drinker has led detractors to minimize his achievements, even to the extent of doubting that he reached the Indian Ocean in 1862, though the tree he had marked with JMDS was positively identified in 1883 and photographed in 1885.