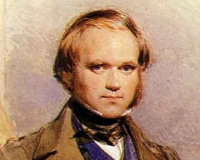 This is where Charles Darwin lived with his new wife Emma.

Description: This was the first home of Charles and Emma Darwin after their marriage in 1839. Charles had moved in on 31st December 1838 and they were married on 29th January. They rented it, furnished and fondly called it Macaw Cottage because of it's colourful decor.

They moved out in September 1842, and in 1941 the German bombers destroyed the house, and it's now the Department of Biology for the University College London. The Darwin building stands on the exact spot of Macaw Cottage.

It was numbered 110 when they moved in, but later it was renumbered to be number 12.