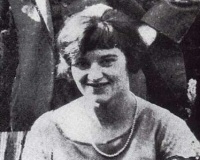 This was the scene of one of the most infamous London murders.

Description: It was here that the scene of the crime took place as Edith and Percy walked home in the early hours of 4th October 1922, while they were on their way home to Kensington Gardens. Edith's lover Frederick Bywaters stepped out of the shadows and stabbed Percy Thompson to death.

The case was highly criticised but the subsequent trial and conviction of Frederick Bywaters and Edith Thompson for the murder of Percy, Edith's husband made Ilford famous. Both hanged, Frederick for murder and Edith for adultery.

In December 1922, the lovers were tried at the Old Bailey in a blaze of publicity. People queued all night for a seat in court to see the beautiful murderess and her young lover. Newspapers portrayed Edith as a wicked adulteress who would stop at nothing - not even murder. When her passionate love-letters to Frederick were read out in court, the press denounced her as 'the Madame Bovary of North-East London' and 'the Messalina of Ilford'.

2» I would love to know what number in Kensington Gardens, Ilford, that Edith lived, as I have a friend who now lives in Kensington Gardens, and we keep teasing her that a murderer lived in her house!!! (Jane Emmings)
Posted by Jane Emmings on 2009-11-27
1» I saw Ediths old house back in 1994 as I am interested in crime and read Weis book on her case. I am planning on going again this coming Saturday as I never saw the plaque before. I still find this a very interesting case and will also swing by Shakespeare Crescent again to see her home before she married Percy. Vickie. :) (Victoria Cordelia Buonagura)
Posted by Victoria Cordelia Buonagura on 2007-09-27