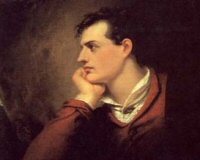 Description: English poet George Gordon Byron, was born here in London near Cavendish Square, on the 22nd of January 1788.

The romantic poet and satirist, who also was famous in his lifetime for his love affairs, and who created the concept of the 'Byronic hero' - a defiant, melancholy young man, brooding on some mysterious, unforgivable in his past.

Byron's right leg & foot suffered from infantile paralysis while the death of a great-uncle in 1798 gave him his title & money.

But Byron seems to have suffered some form of emotional abuse from his mother by being forced to wear dresses in childhood. For years this was thought to have caused his later homosexuality.

The plaque here on the house was the first ever 'official' plaque to commemorate previous historic events. The house is now long gone to ugly retail developments.