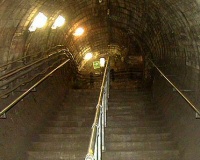 The London Underground's only disused and never used station!

Description: This is an old disused station on the Northern line that was never actually opened! It was originally to be called North End but has attained the nickname of the nearest pub at ground level; The Bull and Bush.

You can see it in between Hampstead & Golders Green on the tube.

It has been earmarked in its past as a nuclear bunker - it is 200 feet down and would have been the lowest station on the network.

It is also earmarked as a possible floodgate should the undergound become flooded.

1» Bull & Bush would never have been a site for a flodgate - its simply too far from the Thames to serve this purpose. Rather, its believed it was possibly a floodgate control centre during the 1950s/60s. Nothing of this now appears to remain underground. (Hywel)
Posted by Hywel on 2007-01-09