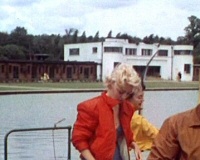 Description: The old reservoir was turned into a proper lido in the 1930s with a George W. Smith building and swimming facility officially opened by the Earl of Howe in 1936.

Attractions in its heyday include rowing boats, motor boats, paddle boats, children's playground, a beach and miniature railway, all built by the Grand Union Canal Company.

It was famous for holding the waterskiing world championships and for appearances in several films.

It was demolished in 1994 and is now a reservoir/nature park with the miniature railway still there.