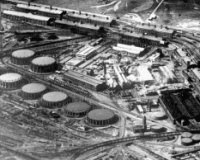 Description: Beckton Gasworks opened in London in 1870, and was the largest gasworks in Europe. The site included Retort House, homes for gas workers and their families, and a huge jetty constructed on cast-iron columns for unloading coal. This 19th-century iron capital comes from Retort House which was badly damaged by bombs during the Second World War.

The name Beckton does not originate from the area. It came from Simon Adam Beck. He was the first governor of the Gaslight & Coke Company which owned the works.

East London suffered a major industrial decline during the 1960s. Beckton Gasworks closed in 1969 and lay derelict for many years. During this time, it became a popular location for filming. One of the most famous to be filmed there was Stanley Kubrick's Hollywood epic, Full Metal Jacket.

Home of the Speaking Clock», 13.km