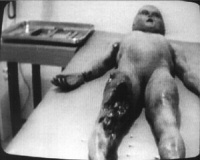 The location of the filming of the recreated Alien Autopsy.

Description: It was in the ground floor living room of a flat here in Camden Town that Ray Santilli and Gary Shoefield recreated their lost footage of an alien autopsy (as seen in the Ant and Dec film Alien Autopsy, 2005).

After the alleged footage Santilli had seen had decomposed he decided to recreate the autopsy of the Roswell footage here. The film was so well made that it was and still is controversially debated by millions around the world.

The Duke of Wellington Pub», 3.5km