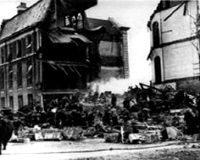 The school bombed during the war killing 38 children

Description: A school was first opened in 1896 to educate children on the new Corbett Estate. The present building opened in 1904, with 300 infants on the ground floor, 380 boys on the first floor and 382 girls on the second floor.

In January 1943 the school was bombed at lunchtime. 38 children and 6 teachers died; many more were seriously hurt. There is a commemorative stained glass window in the infant hall and a recently opened memorial garden.

At 12.30 pm, on Wednesday 20th January 1943, Sandhurst School was bombed. According to eye witnesses the pilot waved to the children in the playground as he flew at rooftop height over the school.

Half the building collapsed into aheap of rubble killing 38 children and six teachers. More than 60 children and staff were injured. For two days people picked through the rubble digging out the casualties.

1» I remember the day your school was hit by the German fighter-bombers. I was living in South Norwood,and coming home from my school at the time. I had almost reached my home when an aeroplane appeared infront of me at rooftop height. I thought it was one of ours but was surprised to hear machinegun fire and see black crosses on its side as it passed overhead. Afew seconds later I saw other aircraft flying low along the railwayline at Norwood Junction and Selhurst firing at the trains. (Colin Richardson)
Posted by Colin Richardson on 2007-01-13