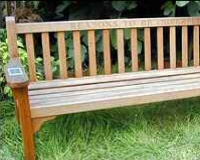 The location of the musical and solar Ian Dury memorial bench

The bench lets visitors plug in a set of headphones and hear eight of his songs, as well as an interview.

In 2001, 12 other musical benches were created for Barrow-in-Furness in Cumbria.

At the time Mr Strichevic told BBC News Online: I have always been a fan of park benches and I remember when everybody used to use personal stereos.

When you see dedications on benches you wonder why people liked the places they used to sit at.

As well as being a singer, Dury was a songwriter, bandleader, actor and artist.

He was also known for his tireless charity work campaigning for Unicef to eradicate polio, which he suffered from as a child.

His single Hit Me With Your Rhythm Stick sold one million copies in January 1979, but in the mid-1980s Dury's luck changed and he switched his attention to acting and painting.

In 1996, he was diagnosed as having cancer of the colon. After secondary tumours appeared on his liver he was told that the condition was terminal.

The bench is titled 'Reasons to be Cheerful' and doesnt appear to work very well any more. Perhaps they have fixed it by now.


3» Where in hampstead did Ian live? (Anonymous)
Posted by Anonymous on 2011-01-08
2» It would be so great if this bench worked. We are local residents, and used to visit the gardens weekly when the children were younger - but had heard nothing about it and it came as an intriguing surprise when I took the kids (19 and 20) back there on a nostalgic visit. We were so unhappy that we werent carrying headphones (we guessed the use of the bench), but if its not working ......... ? (Ed Matthews)
Posted by Ed Matthews on 2007-12-20
1» Visited plenty of times with headphones but it doesnt work. Beautiful peaceful spot would be great to hear the bench working. (sean hearson)
Posted by sean hearson on 2007-10-06

The Beatles and Charlotte Mews», 8.6km