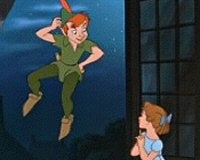 This is where JM Barrie wrote Peter Pan in a studio at the rear.

Description: JM Barrie moved here (also called Leinster Corner) in 1902 overlooking Kensington Gardens, and it was here that he first met the sons of his close neighbours, Arthur and Sylvia Llewelyn Davies.

Barrie became friendly with the Davies boys, joining in their games, and enchanting them with magical tales. It was to George, Jack and Peter Llewelyn Davies that Barrie first told the story of a little boy called Peter Pan, who escaped from being a human when he was seven days old. . . and flew back to Kensington Gardens to live with the birds and fairies. This tale was published as The Little White Bird, and its success was such that Barrie decided to give Peter Pan another outing, this time in a play.

He now began to develop the idea that had implanted itself in his young mind all those years before in Kirriemuir. Peter Pan became the boy who wouldn't grow up, and his character was an amalgam of the Llewelyn Davies boys.

In 1927, explorer Robert Falcon Scott (of the Antarctic)'s wife Kathleen, remarried Edward Hilton Young, and moved here. Kathleen converted the coachhouse at the rear, where Barrie had written Peter Pan, into her studio.