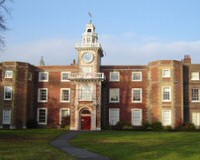 This is a grade I listed 16th Century manor house.

Description: Bruce Castle is a Grade I listed 16th Century manor house in 20 acres of parkland. William Compton - a member of Henry VIIIs court, built the oldest surviving parts of the building.

Since then the building has been modified several times by new owners including the Coleraine family. One of the wives of the 2nd Lord Coleraine is said to haunt the building.

Bruce Castle opened as a Museum in 1906 and now houses the Borough of Haringey's local history collections and archives.

Bruce Castle Park was the first public park in Tottenham. There is a Tree Trail to follow through the park, and the park is part of the Better Haringey Walking Trail.

The Bank of England Museum», 5.8km