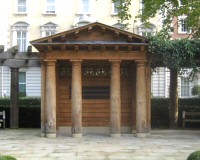 The 9/11 memorial garden opposite the American Embassy in London

Description: This is the 9/11 memorial to the British people who died in New York's World Trade Centre terror attack. The names of the British victoms are inscribed on the wall here.

The quotation is from the American poet Henry Van Dyke. Part of a steel girder from the World Trade Center is buried underneath this.

There was a short ceremony for family members and guests on the 11th September 2003 when HRH The Princess Royal officially opened the garden. The garden was opened to the general public on the 13th September 2003.

1» It was idneed a fantastic event and an eye-opener for many people including ourselves. We stayed to watch Mark sprint to the finish line, absolutely incredible! Here are some pictures of the moment you saw Rudolph Walker . We had lunch with him after the race and what a great man, the amount of charities and fundraisers he gets involved with is very inspiring. (Nendi)
Posted by Nendi on 2012-02-19