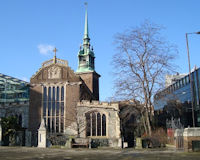 The scene of one of the worst explosions in Londons history.

Description: It was here on the evening of Friday 4th January 1650 at 8pm that gunpowder being stored in a ship chandler's house ignited causing a massive explosion.

The shopkeeper, a Robert Porter, had seven barrels stored in his house here in Tower Street for the night. Thankfully he had already moved twenty more back to his ship on the Thames.

Porters house and four others adjacent, including the Rose Tavern in Tower Street, were utterly destroyed by the explosion. Ten on the street behind were also destroyed and had to be rebuilt. 26 others were badly damaged from the explosion of the fire that raged all night. Windows were broken in many streets around.

Many survivors has to rely on the city to provide support and many guilds and parties helped but hundreds had lost a great deal including homes and livelihoods.

Next door The All Hallows Church by the Tower was badly damaged - all windows had been broken. It was only years later that the churches west tower was deemed badly damaged and had to be rebuilt in 1658. The renovations helped it to narrowly survive the Great Fire of London 8 years later. Admiral William Penn, father of William Penn of Pennsylvania fame, also helped - he had his men from a nearby naval yard remove the surrounding buildings to create firebreaks.