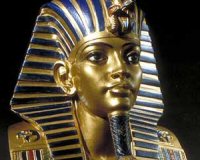 This is where Howard Carter died, some blame the curse...

Description: Howard Carter is best known for the discovery of Tutankhamen's tomb in the Valley of the Kings in 1922. The discovery of the tomb of Tutunkhamun was without doubt the greatest step forward in archaeology and Egyptology ever made. Whether discovered by luck or judgement this find made Howard Carter one of the most famous men in the world at the time and has made him the lead character of numerous books and Hollywood films ever since.

During his trips home from Egypt he stayed here with his brother Simon.

At some point part of the house was converted for his personal use as he gave his address as 19a Collingham Gardens.

He was born and brought up at 10 Rich Terrace, now the site of Richmond Mansions, Old Brompton Road.