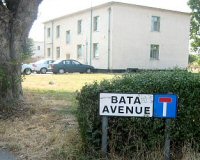 This is where the Bauhaus-inspired Bata town was built

Description: Czech Tom Bata's Bauhaus-designed shoe factory, village, and hotel. East Tilbury is one of the most important planned landscapes in the East of England. It was built by the Czech Tomas Bata to provide both work and housing in a garden village setting. The Bata Museum and Reminicence Centre is located at East Tilbury Library in the midst of the Bata Estate. Tomas Bata visited England in 1929 to find a site for a new factory. He had already built factories and towns in many other countries.

Known as the Czech Henry Ford, he adapted American mass production methods to traditional shoe-making. The layout and buildings at East Tilbury are based on the BATA factories and estate at Zlin in the Czech republic, where the company originated.BATA became one of the most successful companies in the world.

The first factory building at East Tilbury opened in 1933, and the first Bata houses in Bata Avenue were built the same year. They were set in gardens in a chequerboard pattern to encourage more healthy living. Tomas Bata was strongly influenced by the layout of homes in Letchworth Garden City, in Hertfordshire (also an Industrious East Site)

It was a break from the terrace housing of the Victorian period. As well as housing for Bata employees, the company constructed a hotel (now
Stanford House) and Cinema which can still be seen. An open air swimming pool was also built but this has now been demolished.

1» No mention anywhere of the ballroom. Saturday nights with my grandparents - 370 bus from Grays- ballroom dancing in an amazing space.. possibly an 11 year old would be overawed by a revolving glitter ball but it was fantastic. Would have been about 1969 - my sister also remembers it. Grandad always said that he was MC and danced with Vera Lynn there ... might be worth checking out (Liz)
Posted by Liz on 2011-04-22