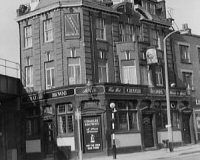 The final location of the famous pub Charlie Brown's.

Description: This is where the last great Charlie Brown's pub stood before it made way for the current traffic hotspot that it now names.

The story begins in the 1890s when Charlie Brown, a former boxer, took over the ownership of the Railway Tavern in Limehouse. He built up a reputation amongst the naval fraternity worldwide that his sons eventually owned pubs nearby under Charlie's name as well. Many clientele would return from the travels with naval relics for the pub.

The original Charlie died in 1932 and his famous curio's split between his 2 sons, betwene who a fued developed. In 1938 Charlie Junioe moved here and opened a new pub The Railway Tavern with the same ethos and reputation as the previous famous boozers. It lasted until 1972 when it was demolished for the delightful traffic roundabout here now. 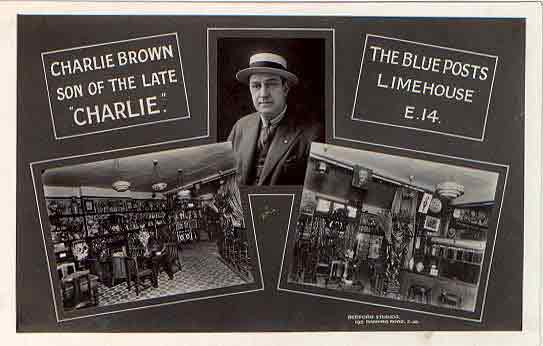 1» My grandfather, Walter Mitchell took over the two Chalie Browns pubs (The Railway and The Blue Posts) just before the 2nd world war and it was whilst she was working behind the bar that my mother (then Lillian Mitchell) met my father, a merchant seaman, Daniel Reidy from Tralee, Kerry and went on to marry him. Following the end of the war my mother and father ran the Railway for a while before taking over the Reirdon Arms in New North Rd, Islington, where I was born on the 26th of April 1957. (Brendan Reidy)
Posted by Brendan Reidy on 2009-09-05