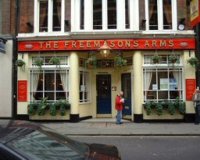 The place where the Football Association was first founded

Description: It was in this pub (or it's previous incarnation nearby) where the rules of football (or soccer to non-europeans) were first established.

The Football Association (The FA) first met here in 1863 on the morning of 26 October 1863. The only school to be represented on this occasion was Charterhouse.

The Freemason's Tavern (later to become the Freemason's Arms) was the setting for five more meetings between October and December, which eventually produced the first comprehensive set of rules. At the final meeting, the first FA treasurer, who was the representative from Blackheath, withdrew his club from the FA over the removal of two draft rules at the previous meeting, the first which allowed for the running with the ball in hand and the second, obstructing such a run by hacking (kicking an opponent in the shins), tripping and holding.

Other English rugby clubs followed this lead and did not join the FA but instead in 1871 formed the Rugby Football Union.

The eleven remaining clubs, under the charge of Ebenezer Cobb Morley, went on to ratify the original fourteen rules of the game. Despite this, the Sheffield FA played by its own rules until the 1870s.

Arsenal and The Sutton Arms», 1.5km