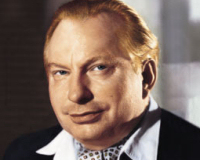 The Robert Adam house where Scientology was founded.

Description: This is where L Ron Hubbard (founder of Scientology) worked between 1957 and 1959, just a few years after he began his controversial religion.

Fitzroy House is an original 1791 building imitating the designs of Robert Adam, the famous Georgian period architect who along with his brother designed Fitzroy Square.

The house comprises four impressive floors, one of which is dedicated to an exhibition of Ron Hubbard's early life from boy scout to explorer. It also illustrates his career as one of the top fiction writers in the 1930s and 40s and his later achievements in the humanities.

Buddhism at home in London», 7.1km

The Congregation of Jacob», 3.6km