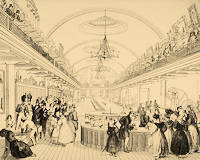 This is where the forerunner to the Science Museum used to be.

Description: The Adelaide Gallery was opened here on Adelaide Street, inbetween Covent Garden and North of The Strand by American inventor Jacob Perkins.

It was called the National Gallery of Practical Science, Blending Instruction with Amusement.

Mogg's New Picture of London and Visitor's Guide to it Sights, 1844 said This establishment was commenced by a party of scientific gentlemen, with a view to the promotion of the arts and manufactures by their connection with science. Science alone, however, it was soon discovered, had not of itself attraction sufficient for the multitude, and a resort to meretricious aid was the consequence. Its first proprietors having seceded, it passed into other hands, who, by combining the astonishing powers of electricity with the wonders of optical illustration, scientific lectures daily delivered, and introduction of promenade concerts, have succeeded in establishing a very agreeable lounge. The Boccius Light was first exhibited here.

Throughout the 1830's it contained some 250 machines such as a pocket thermometer, a gas mask, an oxyhydrogen microscope, daguerreotypes, electricity and magnetism.

Highlights included Perkins's steam-gun, which discharged a shower of bullets, but was never adopted in serious warfare; and the gymnotus, or electrical eel, a creature which emitted shocks on its back being touched.

When a rival institution appeared in the shape of the Polytechnic, in Upper Regent Street, which speedily and completely took the wind out of the sails of the original establishment.

In the 1840s the gallery became an amusement hall and after Signor Brigaldi's Italian Marionettes became successfull here in 1852 the building was renamed the Royal Marionette Theatre.

It was all part of the Lowther Arcade, a splendid glass-covered shopping arcade in the Strand which was famous for its toy shops. The Lowther Arcade was demolished in 1904 and Coutts Bank now sits on the site.

The Man who knew everything», 1.1km