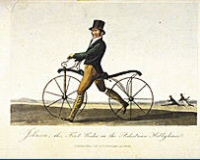 The inventor of the hobby horse or first bicycle worked here.

Coachmaking was a main industry in this part of Covent Garden. About this time the 2-wheel velocipede was introduced by the German nobleman, Karl Von Drais and Johnson obtained one of these wooden machines and, seeing the potential it had, set about improving it.

His professional skills as a coachmaker enabled him to make an elegant machine which he patented and called the pedestrian curricle and then the hobby horse, it became Britains first bicycle and Regency dandies made them very popular.

The craze only lasted about three years and Johnson continued as a coachmaker until he died on Christmas Day 1833. The family business continued to trade here until 1867.

Tony Banks MP, the late Minister for Sport, unveiled the plaque in 1998.

The Man who knew everything», 1.1km