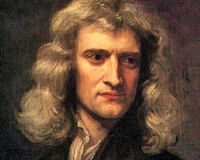 Description: Today it's Westminster Reference Library but from 1710 to 1725 Sir Isaac Newton lived here when it was a three-storey terraced house built around 1695.

It was demolished in 1913 but the interior panelling and other fixtures of the front parlour were saved and reconstructed as the Isaac Newton Room at Babson College, Massachusetts.

After living here he moved to Kensington but he retained the St Martin's Street house here until his death in 1727.

Around the rear of the library is the Newton Institute and there is a bust of Newton in nearby Leicester Square Gardens.

There is also an inscription nicely cut into the stone on the centerline of the library stating SIR ISAAC NEWTON LIVED IN A HOUSE ON THIS SITE 1710-1727.

If you enter the library there are two further inscriptions on the staircase from the entrance to the main reading room:

Here stood the house of SIR ISAAC NEWTON in which he lived from 1710 to 1727 & was visited by his friends Addison, Burnet, Halley, Swift, Wren and other great men. Later it became the home of Dr CHARLES BURNEY and his daughter Frances and was the resort of Johnson, Reynolds, Garrick and many others. The library also covers the site of the Leicester Fields chapel built for the Huguenots in 1693.

And the second plaque:

This public library erected to replace the former library of the Parish of St Martin in the Fields was opened on the 8th Oct 1928 by THE VERY REV. W. FOXLEY NORRIS DD. DEAN OF WESTMINSTER.