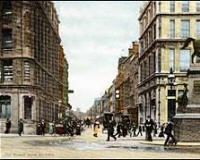 Description: Indeed, Hatton Garden starred in the Stanley Kubrick film 'Eyes Wide Shut', that saw Tom Cruise and Nicole Kidman get it on in more ways that one... Also, the area around Hatton Garden, has been the centre of Londons jewellery trade since way back in the mists of medieval time.

The Duke of Wellington Pub», 4.1km