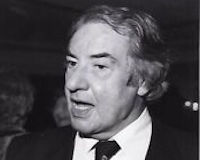 This is where the prolific playwright Ted Willis was born.

Description: Ted Willis (1914-1992) was a prolific playwright, novelist and screenwriter and was even acknowledged by the Guinness Book of Records as such!

He is better known to us as the writer of pioneering and much-loved police series The Dixon of Dock Green although he did screenwrite 13 films as well as TV series Virgin of the Secret Service, Hunter's Walk, The Adventures of Black Beauty, Copper's End, Sergeant Cork and Mrs Thursday.

He married London-based actress Audrey Hale in 1944, going on to have a son John and a daughter Sally.

In 1959 Willis was the subject of This Is Your Life in 1959, and in 1963 he was awarded a life peerage to become Baron Willis of Chislehurst, on a Labour Party nomination.