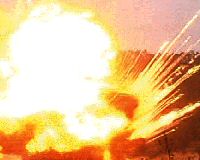 Here was the scene of a disastrous Gunpowder explosion.

Description: Rose court, nearby was named after the Rose Tavern a lively pub that was here in the 17th Century.

On one Monday night in January 1649, a Tower Street resident, Robert Porter, a ship chandler - or provisions dealer - was storing 27 barrels of gunpowder in his house to be loaded onto a ship the following day.

Also on the street, a group of gentlemen, merchants, tradesmen... of very good quality were indulging in a parish feast here in the Rose Tavern, while at about 8pm that night, a Mr Dunne, staying with his mother-in-law, a midwife, was getting ready for bed.

But a sudden and disastrous explosion devastated the pub, dozens of houses and killing 67 people.

Of the Rose customers, 16 perished - including, according to one report, the landlady who was found sitting upright at the bar.

Mr Dunne was hurled into the nearby churchyard and died, and houses belonging to a shoemaker and two merchants were also utterly defaced, one contemporary account said.

And legend has it that the force of the blast threw a baby girl in her crib from a house to the top of the church tower - where she was found alive and well the next day.